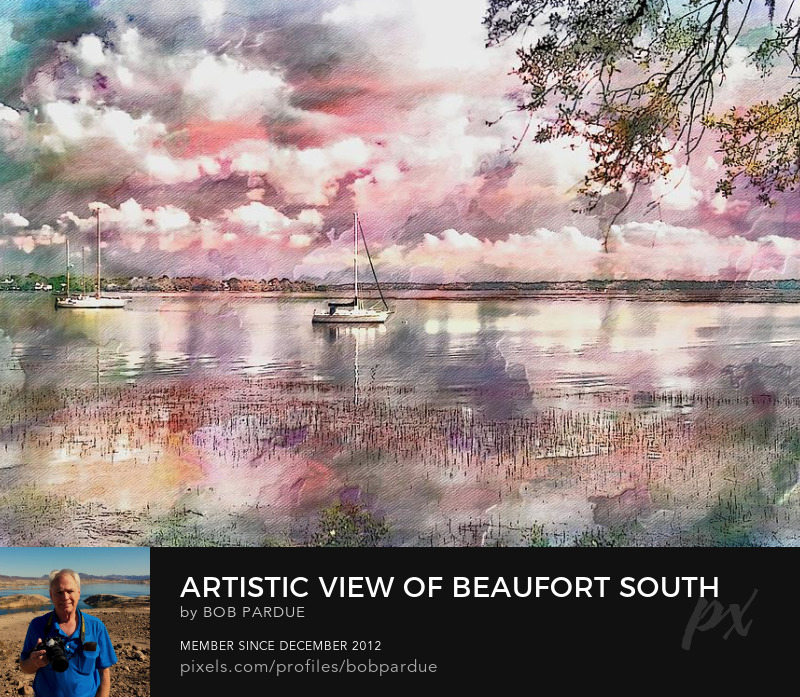 Ever dreamed about the beautiful low country of South Carolina?

But, I discovered a lost paradise when Jean & I traveled to create this fine art photo of the Beaufort harbor in South Carolina.

The area is so peaceful you’ll escape to total relaxation.

Now, it’s a given things get a little busier when you travel to the downtown area of Beaufort.

I know how to get to Beaufort SC but did a bit of research to find some more info for you. Here’s what wiki said:

“Beaufort is located on Port Royal Island, in the heart of the Sea Islands and South Carolina Lowcountry.

The city is renowned for its scenic location and for maintaining a historic character by preservation of its antebellum architecture.

And, the city hosts some major military establishments, being located in close proximity to Parris Island (since 1915) and a US naval hospital. Not to mention, Beaufort is home to the Marine Corps Air Station Beaufort.

So, if you want to visit an island of beauty and adventure, Beaufort is a must! And, just as I did you’ll find plenty of SC photo opportunities to fill your camera.

I tried to shoot this fine art photo with a split down the middle landscape view. Many photographers use the “rule of thirds” in everything which is just fine.

However, I felt the split frame captured the serenity of Beaufort harbor with the ships supplying enough offset to become pleasing to the eye.

So, now you know the rest of the story about my Beaufort, South Carolina photography adventure.

But, don’t just listen to me. Get in your car or on a plane and make your own memories by visiting the South Carolina low country! You won’t regret it!

With this particular image, I performed some mixed media “magic” to give the photo a dreamy, more surreal look.

But, if this is not your style, you can see other versions of the low country picture on my site at pixels.com .

Let me know how you feel about this fine art photo of Beaufort, South Carolina. Lastly, the picture was made in the good old USA! 🙂

How to Purchase This Beaufort SC Photo

If you’d like to decorate your wall with this fine art photo, simply go shopping here. The picture is available in a variety of sizes and you can order a framed print, canvas, poster & other print variations.

Disclosure: Some recommended photography or camera products may use affiliate links. BobPardue.com is a participant in these programs. The links lead to affiliate advertising programs designed to provide a means for sites to earn fees by advertising and linking to the sales pages. As an affiliate I earn from qualifying purchases. Thank you for helping support this photo website.

This site uses Akismet to reduce spam. Learn how your comment data is processed.

Important This site makes use of cookies which may contain tracking information about visitors. By continuing to browse this site you agree to our use of cookies.